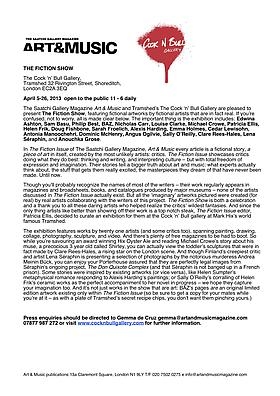 The Saatchi Gallery Magazine Art & Music and Tramshed’s The Cock ‘n’ Bull Gallery are pleased to present The Fiction Show, featuring fictional artworks by fictional artists that are in fact real. If you’re confused, not to worry, all is made clear below. The important thing is the exhibition includes: Edwina Ashton, Sam Basu, Philip Best, BAZ, Nicholas Carr, Louise Clarke, Michael Crowe, Patricia Ellis, Helen Frik, Doug Fishbone, Sarah Froelich, Alexis Harding, Emma Holmes, Cedar Lewisohn, Antonia Manoochehri, Dominic McHenry, Angus Ogilvie, Sally O’Reilly, Clare Rees-Hales, Lena Séraphin, and Anouchka Grose.
In The Fiction Issue of The Saatchi Gallery Magazine, Art & Music every article is a fictional story, a piece of art in itself, created by the most unlikely artists: critics. The Fiction Issue showcases critics doing what they do best: thinking and writing, and interpreting culture – but with total freedom of expression and imagination. Their stories tell a bigger truth about art and music: what experts actually think about, the stuff that gets them really excited, the masterpieces they dream of that have never been made. Until now.
Though you’ll probably recognize the names of most of the writers – their work regularly appears in magazines and broadsheets, books, and catalogues produced by major museums – none of the artists discussed in The Fiction Issue actually exist. But all the ‘imaginary’ artworks pictured were created (for real) by real artists collaborating with the writers of this project. The Fiction Show is both a celebration and a thank you to all these daring artists who helped realize the critics’ wildest fantasies. And since the only thing artists like better than showing off their work is a top notch steak, The Fiction Issue editor, Patricia Ellis, decided to curate an exhibition for them at the Cock ‘n’ Bull gallery at Mark Hix’s world famous Tramshed.
The exhibition features works by twenty one artists (and some critics too), spanning painting, drawing, collage, photography, sculpture, and video. And there’s plenty of free magazines to be had to boot. So while you’re savouring an award winning Hix Oyster Ale and reading Michael Crowe’s story about his muse, a precocious 3 year old called Shirley, you can actually view the toddler’s sculptures that were in fact made by Clare Rees-Hales, a rising star on the London scene. And though Finland’s creepiest critic and artist Lena Séraphin is presenting a selection of photographs by the notorious murderess Andrea Meinin Bück, you can enjoy your Porterhouse assured that they are perfectly legal images from Séraphin’s ongoing project, The Don Quixote Complex (and that Séraphin is not banged up in a French prison). Some stories were inspired by existing artworks (or vice versa), like Helen Sumpter’s metaphysical romance responding to Alexis Harding’s paintings; or Sally O’Reilly’s corralling of Helen Frik’s ceramic works as the perfect accompaniment to her novel in progress – we hope they capture your imagination too. And it’s not just works in the show that are art: BAZ’s pages are an original limited edition artwork existing only within The Fiction Issue (so be sure to get a copy for your mates while you’re at it – as with a plate of Tramshed’s secret recipe chips, you don’t want them pinching yours.)

Press enquiries should be directed to Gemma de Cruz: