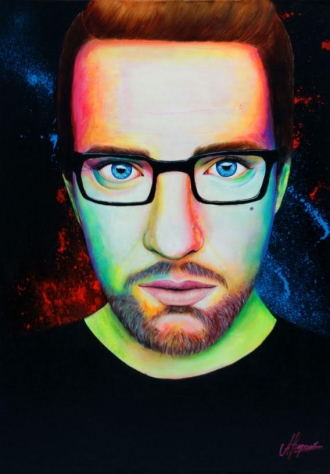 Over the last 15 years Dolphin has developed an extensive body of work exploring issues of fandom and idolatry, often with a meticulous and highly crafted approach to making. A graffiti-strewn door, lyrics carved into a vinyl record, a heavily worn bench carved with messages to a recently departed rock star, Dolphin offers sacred sites for a secular age. While Dolphin's sculptures often have the look of something found, they are laboriously constructed using materials such as plaster, tip-ex, biro, felt-tips and graphite pencil. The artist harnesses readily available and cheap materials found in hobby stores and office stationary cupboards. Dolphin elides the materials of the workplace and the home, focusing our attention on issues of labour and time.

In new works such as 660 Hits (2016) Dolphin smashes up an electric guitar, filming the process and then painstakingly re-assembling it. The gesture recalls Jimi Hendrix smashing his guitar on stage in the late Sixties. The seemingly impromptu act of public catharsis was, in fact, the suggestion of Hendrix's manager. This iconic act of rebellion was a carefully choreographed piece of PR. The smashed guitar is a motif within the history of rock music and one can look towards Kurt Cobain's ironic rehabilitation of the act in the Nineties as an attempt to amplify the uneasiness between authenticity and artifice. By smashing and then repairing his guitar, Dolphin rewinds the choreographed moment(s) of destruction(s), with the ameliorative gesture of repair.

More recently, Dolphin has started to invert these forms of idolatry by asking amateur artists found online to draw portraits of him from a brief description. The drawings, Self Portrait By Others (2014 - ongoing), are at points surreal, affectionate and comical. The work operates as a type of anthropology, perhaps revealing more about the authors of the work than the represented subject. In a similar gesture, Dolphin has invited the musician Jad Fair to compose a song about him based on a brief description and a variety of musicians responding to abstract instructions given by the artist which acts as a soundtrack to the exhibition; Richard Skelton, David Grubbs, FM Einhert, Dean McPhee and Santa Sprees.

Running through all of Dolphin's work of the last 15 years is an interest in how we construct our own identities through the identification of others. While cultural activity is often communal and social; listening to music, just like making art, often involves deeply personal acts of withdrawal. Situated somewhere between a hobby and work, making art in the studio requires a particular type of semi-private labour.

The exhibition at NGCA coincides with further presentations of new work by Dolphin at Tyneside Cinema, Newcastle and National Glass Centre, Sunderland and will be supplemented with a series of new essays written on the artist as well as an extensive public programme of events.

Graham Dolphin (B. 1972) is based in Newcastle upon Tyne.