A selection of Euro containers, stacked in a composition taken directly from the pages of a mail order
catalogue, the tops of which have been modified with the addition of bird spikes.

A row of hand built replica flat screen monitors that are turned off, attached to the wall above a grey leatherette bench as you may find in a museum cafe or lobby area.

A work consisting of 10,000 all black, circular casino chips, each with a number written on them in
white marker by the same hand. Thrown over the gallery floor.

A series of works produced from multiple peg notice boards that are hung butted against one another
on the gallery wall, and across which are displayed fragments of concrete poetry.

A title that is more than a title, 2015 by Spencer Anthony (detail), 2015, Recording studio window broken from the inside out

Silver dancers pole, with cable ties attached from starting 1m from bottom for 3m. The balck cable ties are spaced 1 cm apart and each is turned one cm from the last so they make a gradually twisting pattern up the pole.

A photograph taken form a bird’s eye view perspective of a nude female model reclining on the mattress that constitutes the artwork, I finally got my head together, and now my body is falling apart, 2011.

Ryan Gander: It sounds embarrassing but I’ve been a massive fan of your work since I first saw a show by you in Sittard when I was a student in Amsterdam, it was a long time ago but I remember it really well. The main piece was three terracotta decorative fireplaces… The work you are making now looks like a different person could have made it, can you tell me about that?

Spencer Anthony: That would be the currency of form then! You probably think you can tell if a female or a male artist has made a work by just seeing it also? Am I right?

SA: …We don't make work like that, we make work with the infinite vocabulary we have learnt, we are fluent… so why would anyone speculate they could unravel something about a person’s real being from their constructs? The only artists that make work that aren’t constructs are bad ones. I’m not interested in truth, I am not a documentary photographer, I am a liar, I can be whoever I want to be.

RG: I see, so do you mean that you are a different person to who you were when I saw your Sittard show when I was a student?

SA: No… I mean I have the ability to convince you that I am a different person.

RG: You sent David Risley and I some images of works for the exhibition a few months back being assembled in your studio in Falmouth, and when we saw the images a few people who were standing around in the gallery, who saw the email, said the work looked very ‘current’. I hadn’t thought about this before, but the work is kind of ‘now’. Can you talk a bit about that?

SA: You mean current as in ‘of its time’, not as in flow - or curren-cy, in terms of its movement through economic systems? I think you are alluding to the post-net-thingy. I don’t have the Internet, so I don't know…

RG: Really? You don't have the Internet at all?

SA: No, what would a man like me, a man of my age, do with the Internet? I mean I’ve used it, but I don't actually have it. I have to go to Falmouth library and it’s closed Wednesday, Friday, Sunday as well as Saturday afternoon, so it is limited.

RG: Sorry I interrupted; you were talking about the ‘current’ aesthetic?

SA: No you were actually the one talking about the ‘current’ aesthetic… I was just going to say, as I said earlier, just because it looks like it is, doesn't mean it is, but I know what art by young people looks like at the moment. I am aware of that. But these are just names. When I lived in Mexico City in the 70’s and worked next door to El Eco the guys from there called me a Concrete Poet, and when I lived in Brussels in the late 80’s the Walloons called me ‘British Sculptor’. The problem with names is it leaves you nowhere to go… What am I to you and Risley, and his runners and go-fers? A Post Industrial, Post Corporate Modernist Plastic Poet… without the Internet…? The work looks like it is made now, because it is made now and I decided to make it look of it’s time, that's what we spend our lives preparing for Ryan, to become very good at pretending…

Extract from a conversation between Spencer Anthony and Ryan Gander,  Falmouth, 29th June, 2015.

Spencer Anthony is a celebrated British playwright and theatre practitioner, as well as an occasional artist. His plays and productions have graced theatres across Europe and the Asia Pacific region for a number of decades. Having travelled the world and been heavily influential in the formation of the Blue Conceptualist art movement centred in Brussels during the mid 1970’s, Spencer now lives and works in Falmouth, UK less than 30 miles from where he was born. 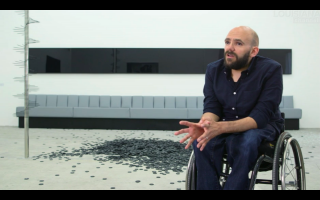