In Charlie Woolley’s 3rd solo show at the gallery Corporate Rock Still Sucks, the artist continues to look at the relationship between countercultural objects and imagery and their subsequent commodification.

The utopian interior has greatly shifted in its location and availability during the past several decades, habitats that once might have been found deep in the pages of the Whole Earth catalogue, or some other nameless hippie publication, are now readily available to us for purchase in places like Ikea. This presents us with a kind of dilemma; the readiness of cheap, utilitarian, and (almost) labour free furniture pitted against the handmade, artisanal bourgeois object.

Contemporary mass produced furniture often owes more in it’s manufacture and materials to the make do and mend aesthetic of punk and hippie squat culture than to the heavy, well built, formal immutability of Chippendale or more traditional furniture. Loose, re-appropriated objects-turned-furniture made as cheaply as possible to suit several functions and effortless to move around. Easy to abandon or re-improvise into something else.

Subcultural imagery has undergone the same shift. Certain iconographies and cultural signifiers once considered criminal or subterranean have become common place and readily available. Identities that once upon a time may have taken a lifetime to earn, can now be taken on instantly like avatars, fully inhabited and later discarded then replaced. This leads us into an interesting and perverse state of flux, and in many ways a much desired queering of archetypical homogeneities, it is the crucial point which Woolley identifies in his work. Pointing to a crisis in reliable aesthetics that spreads above and beyond the underground and into our quotidian experiences of capital.

Through this Woolley poses an over arching question regarding the veracity of countercultural space. Has it been entirely subsumed by commerce, or did it ever exist to begin with? Was the countercultural ‘outside’ of capital merely a fantastical mirage, designed to placate and permit controlled explosions of human experience?

Woolley’s images and objects rest somewhere in-between these precarious states, exposing the appropriation and redistribution of subcultures by the mass market. 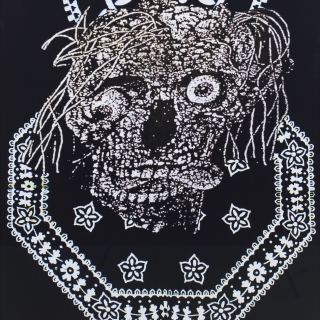