A man sits on a stool with a brush in his hand, taking a break from painting a white wall blue. Somebody takes his picture. The photograph is printed in a DIY magazine that ends up, 30 years later, in a painter's studio. The painter leaves it lying around, soaking up oil and turps while she absorbs the image. She paints the image with its accidentally accrued stains and spatters. The man sits on a stool in a painting. His clothes are covered in drips of the blue paint he has on his brush. The newly painted wall is covered in greasy blots. Stains spread from the floor over his leg. He looks disconsolate, stuck in this feedback loop of paint and image. His work always half-finished, worse than when he started.
Anna Bjerger’s fascination is in the construction of an image. She works from photographs. Having found an image it might lie around her studio for some years while she absorbs its essence. The photographs she chose to work from for this show all have an inherent interference, either in the photographic process such as vaseline or coloured filters on the lens, or oil and turps stains from Bjerger’s studio. When painted, these disruptions cause the viewer to rethink the image and take a slower look.
The exhibition will feature a major new work, ‘Filter’, comprising an image of a woman holding a colour chart repainted 24 times on panels hung as a diamond grid. The repetition of a single motif, each treated with the same intensity, makes it impossible to relate to the panels as singular images. Their differences becomes virtues, their mistakes accepted, as it becomes more and more unclear what we are looking at.
Bjerger says ‘Painting is the subject of my work, everything around it is just a way of making sense of it.’
Anna Bjerger (SE, 1973) studied at the RCA, London. She now lives and works in Sweden. She has works in the collections of Moderna Museet, Stockholm, Stedelijk Museum, Amsterdam, Zabludowicz Collection, Tishman Speyer Collection among many others. She has a solo show at Växjö Konsthall in March, in which she has chosen to include works by Vera Nilsson (SE, 1888-1979). A 2 person show at Galerie Møller-Witt in Aarhus and will feature as part of the Nordic focus at Armory show, NYC. A new monograph on her work has recently been published with essays by Christian Viveros Faune and Karin Faxen. 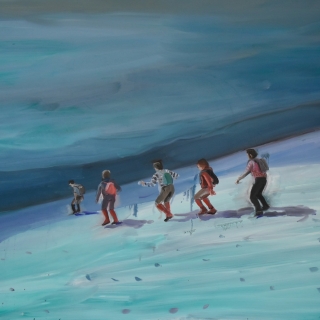 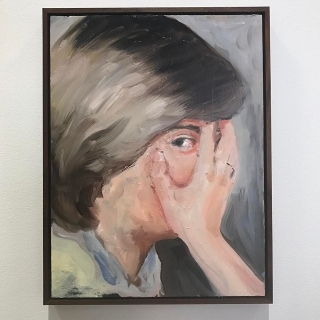